Everybody Is Against Everybody... 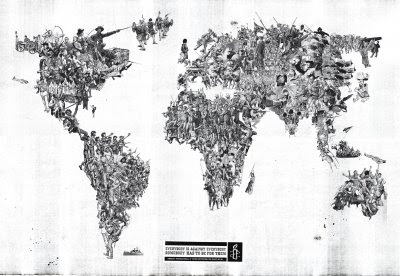 ‘Everybody Is Against Everybody – Somebody Has To Be For Them’: the message behind this Amnesty International poster is ultimately a pessimistic one – war is so endemic to the human condition that we can’t hope to eradicate, only to alleviate it.

That rather hobbesian world view is underscored by this world map composed of soldiers, warriors and fighters of every colour, creed and continent, a veritable United Nations of War, all placed as geographically correct as possible: from loinclothed tribes armed with long sticks or bows and arrows make up much of South America, while the north of the continent is lined with belligerents in Pilgrim dress, Revolution-era garb, Civil War uniform and even the Ku-Klux Klan costume. And so on for each continent, mutatis mutandis.

Posted by Public Media Institute at 3:41 AM