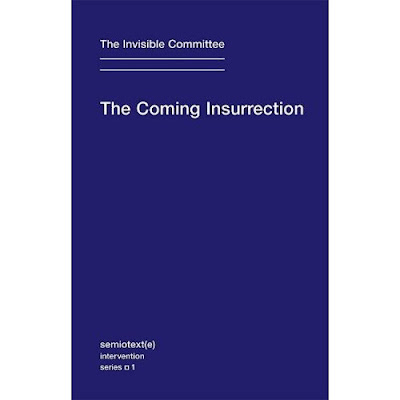 The Coming Insurrection is an eloquent call to arms arising from the recent waves of social contestation in France and Europe. Written by the anonymous Invisible Committee in the vein of Guy Debord—and with comparable elegance—it has been proclaimed a manual for terrorism by the French government (who recently arrested its alleged authors). One of its members more adequately described the group as "the name given to a collective voice bent on denouncing contemporary cynicism and reality." The Coming Insurrection is a strategic prescription for an emergent war-machine to "spread anarchy and live communism

Just picked up the book version printed in English by Semiotext.
A link was sent to us by a poster on the Conversation.>
Posted by Public Media Institute at 11:22 PM