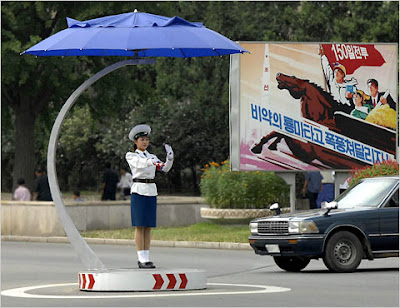 An undated photograph released by North Korea’s official news agency shows a woman directing traffic in Pyongyang on one of the new covered podiums found in intersections across the city, which has no traffic lights.

Updated | 12:00 p.m. Trying to discern what life is like in North Korea by following the country’s relentlessly cheerful official news agency is a jarring experience for anyone inclined to think of the reclusive communist nation as a grim, unhappy place. According to the Korean Central News Agency, things in Pyongyang are eternally looking up.
Read more >> NYT
Posted by Public Media Institute at 2:56 PM

If individual you appraise live casino, you desire be aware of the fact online casino slots can be.

Its look like traffic but plenty amazing and awesoem collection. Thanks a lot for sharing.