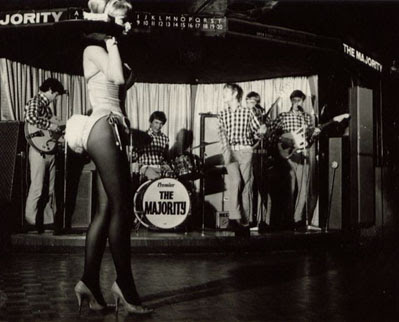 Reuben Kincaid is going to be giving free advice at the Inauguaration of this important event to get heads together.

Every 4th Wednesday of the month
9pm – 2am
$5 Cover – For free entrance RSVP: info@sonotheque.net

"The spectacle is not a collection of images; rather, it is a social relationship between people that is mediated by images."
- Guy Debord: “The Society of the Spectacle”

The modern urban landscape with its overabundance of competing attractions, presents to the viewer/participant an overwhelming sense of alienation and disorder, often making them passive participants in their daily discourse. In his book “The Great Good Place”, urban sociologist Ray Oldenburg demonstrated the importance of informal communal meeting places (bars, coffee shops, hair salons …) to counteract this modern psychic fatigue by offering a respite to the individual while at the same time leveling the social and economic status of individuals by offering psychological support and communal interaction. He delineates these necessary public gatherings as the “third space” and eloquently states …

"The character of a third place is determined most of all by its regular clientele and is marked by a playful mood, which contrasts with people's more serious involvement in other spheres. Though a radically different kind of setting for a home, the third place is remarkably similar to a good home in the psychological comfort and support that it extends…They are the heart of a community's social vitality, the grassroots of democracy, but sadly, they constitute a diminishing aspect of the American social landscape."

To support this need for an urban oasis, Sonotheque is showcasing on the 4th Wednesday of every month “Rebirth of the Cool”, a much needed alternative to the regular club vibe of overwhelming and often indistinguishable dance beats that drown out conversations and sadly often feature scene over substance. This month’s focus of “Rebirth of the Cool” will be aimed toward the cool lounge sounds of the sixties and seventies, the period where hi-fidelity became the recording industry standard and where jazz sounds melded with soulful rhythms.

It was the time between these two decades when labels like Blue Note, Prestige, Cadet, Brunswick, Verve, Fantasy and Decca (and too many more to list) shifted from straight-ahead jazz to include the styles of soul, funk, electronic and world influences. It was also during this extended period where artists like Keith Mansfield (of KPM sound library fame), Arthur Lyman, Lalo Schifrin, Hal Blaine, David Axelrod and Alan Hawhshaw stretched the vocabulary of recorded music with music made specifically for the audiophile and aided in the emergence of the bachelor pad with its aesthetic of the “cool’ and the modern nightclub and discotheque.

It was within this milieu locally here in Chicago where establishments like the Playboy Club and Gaslight Club began. Both started out initially as members-only/keyholder nightclubs before expanding globally from New York to Washington to Paris and to London. Newsweek magazine called the Playboy Club “a playground for adults” with its world-class entertainment and service. Other similar venues flourished world-wide including “The Ad Lib” in London, the “Cheetah” and the “Electric Circus” in New York City and the “Whiskey a Go Go” in West Hollywood; each creating its own climate of sophisticated revelry and controlled decadence.

It is our hope that this installment of “Rebirth of the Cool” will recapture the feel and intimacy of the nightclub environment of the sixties and seventies where well-made cocktails flowed freely, thoughts were exchanged in sometimes heated discourse and jazz-influenced music complemented the atmosphere of the intimate jazz club, cocktail lounge or nightclub.

“Rebirth of the Cool” will also show rare films and video clips from the period as a backdrop to compliment the sounds of the night.

Videos will range from classic rare clips from swinging 1960’s go-go parties and clubs from around the globe.

JOE BRYL:
DJ Joe Bryl was once named by the Chicago Tribune as Chicago's "Most Interesting DJ.” He has been working in the club and entertainment industry for the last 20 years and was an original partner in the creation of HotHouse. A true pioneer continuing to push the international sounds as a DJ, he is also the artistic director for Sonotheque where he presents internationally renowned DJs. He holds the monthly "Braziliance" residency at Sonotheque which showcases the best in Brazilian beats, soulful Samba anfd funky favela. He has opened up for Seu Jorge at Millenium Park, Os Mutantes at the Metro and has curated film events at The Chicago Cultural Center. Recently, he was featured in New City and Proximity magazines. He has also DJ'ed with the people as diverse as Madlib. Tetine, Greyboy, Giles Peterson, Kyoto Jazz Massive, Peanut Butter Wolf, Bonobo and Diplo.

Reuben has been advising and managing artists, musicians and writers for the past two decades. He opened his Chicago branch of the Reuben Kincaid Artist Management last year in the Bridgeport Arts District. He will be giving free advice for artists and culture professionals on this special one night only stopover appearance in Chicago at Sonotheque.

Link: http://www.reubenkincaid.blogspot.com/
Posted by Public Media Institute at 11:54 AM