Send in the clowns: 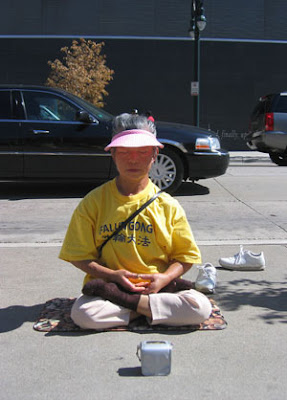 The only truly peaceful protester in Denver

11:30 am: In Civic Center Park Glenn Spagnuolo, SPAGZ, is barnacle protesting banner wielding homophobes who are in turn barnacle protesting Recreate 68’s park protest permit. Glenn has a bull-horn and is sporting a borderline incitement t-shirt that screams DEFEND DENVER over the silhouette of a cocked Kalashnikov. 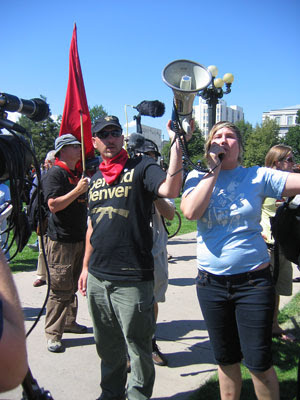 11:40 am: A brewing melee between Recreate 68 and the homophobes is interrupted by nearby cries of:

A small squad of as-yet-unincarcerated anarchists is facing off with a police line at the western edge of the park. Media media media media jogs across the grass in heels and top-siders for a follow up shot to last nights street sweep.

The homophobes (sorry can’t help but editorialize there) are left open for comment. Ruban Israel, from Los Angeles, silenced on a macro scale due to his recently crumpled bull-horn, carefully stipulates that the group is comprised of “nondenominational street preachers NOT protestors”. When asked if there were any Catholics in the mix he replies, “We’re Christians.” The group hails from “LA, Jersey, Utah, Wisconsin, Arizona, Florida, And Norway.” They’re concerned with the whole pantheon of religious-right issues but all agreed that “homo-sex” would be a good hot button issue to push for the DNC.

I tell Ruben that the Radio Shack on the pedestrian mall is running an eighty dollar special on bull-horns and move on to check out the...

12:00 noon: Procession of Future Puppets. The puppet parade – organized by a group called Backbon Campaign which is also traveling to St. Paul for the RNC – rolls out onto west Colfax absorbing anyone center-right leftward, including a Code Pink battalion, Tent Stater’s, convention tourists with kids, media media, and the cops who lead the procession with a golf card flashing the alternating sign, “Welcome to Denver,” and “Follow Us.” (See more images) 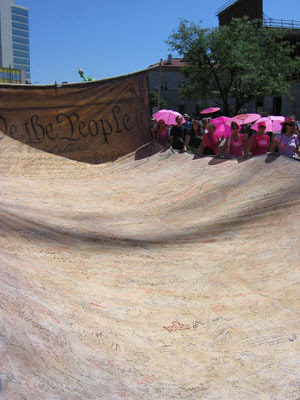 1:00 pm: Back at Civic Center Park the 911 Truth Commission is out in force co-opting the more paranoid leaning members of all groups right to left. A Tent State organizer (or is he Code Pink) yells “911 was a lie! The truth will come out!” into his bull-horn in a confusing convergence of protestations. Media media media looks dejectedly around for Alex Jones so they can get a sound-bite and break for lunch.

I’m approached by the documentary crew in matching outfits – Todd Cassetty with HiFi Fusion from Nashville – for a comment on the Barnacle Protestor.

Since I’m obviously not “sticking to the facts”, I decide to break another journalistic credo, “don’t become the story,” and pimp-out Todd’s documentary with some mis-information of my own.

Taking a cue from the Barnacle Protestor’s left-wing anarchist propaganda flyer, (see the text of The Haymarket Issue) I come at Recreate 68 with an oblique left. In the heat of critiquing their backward-looking permitted-protest mentality from an Ontological Anarchist stance I decide it would be really over-the-top to identify myself as “Pete Bergman” the “anonymous artist” and claim the WE BEAT YOU flyer as an act of Black Propaganda...

2:30 pm: The rest of the afternoon is spent in clown training on the grass at Tent State with Captain. Cookie Chaos and Pvt. Spud Peel of the Clandestine Insurgent Rebel Clown Army. Formed in the UK in 2003 to protest the G8, CIRCA now has gaggles of clowns all over the world; Israel/Palestine, all over Europe, Peru, Oaxaca, and now Denver. The clowns, like Code Pink, interject themselves between hard-core Anarchists and lines of cops to diffuse violence with humor and beauty. When the police chant, “BACK UP! BACK UP!” the clowns will demonstrate how to “back-it-up” Mary J. Blige style. 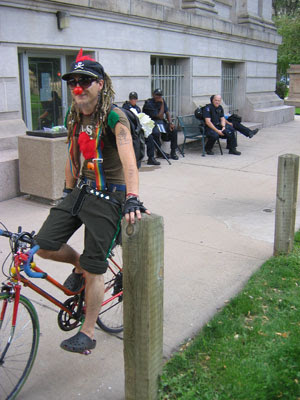 The Barnacle Protestor makes a late appearance on his bike with the whirligig, helmet and pads, the SPAGZ LIES sign-book, a back-pack full of shirts, a camel-back full of god-knows, a bull-horn, a Hawaiian lei around his neck, and a medic bag full of his yin-and-yang left-right flyers.

JoJo, who with Adam Jung organized Tent State, approaches him to talk inquire about the WE BEAT YOU flyer, which Adam also received in the early June email missive. While disclaiming authorship of the flyer, he does take the opportunity to malign SPAGZ and Jill from Recreate 68. JoJo, responds with her own story of being physically threatened by Jill because she asked Glenn to quit spreading malicious lies about Adam!

5:00 pm: I head out on bikes with Pvt. Spud Peel and The Barnacle Protestor to Civic Center Park on a SPAGZ hunt. Denver’s citizenry, convention tourists, and cops are mesmerized by the whirligig. Now reaching the status of quasi-celebrity, I hear the phrase “Barnacle Protestor” float across the air from spectators. One cops points to the whirligig and exclaims, “I heard about that!” Another ten blocks up meekly protests after the passing whirligig, “Wait come back... I haven’t gotten to meet you yet...”

Glenn is in Civic Center Park eating a paper plate of Food Not Bombs lentils. Upon seeing Barnacle buzz by with his SPAGZ LIES sign, he stammers something to the effect of, “Uh.. hug.. you... again!” To wit The Barnacle Protestor replies, “Have fun Glenn. Be safe!” 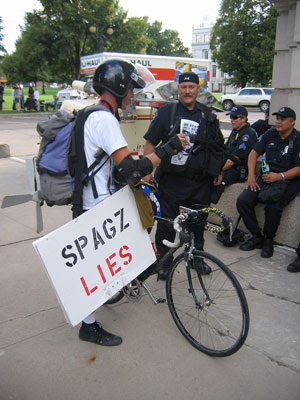 The Barnacle Protester, IS he a Special Agent?

Posted by Mr. Peter Miles Regenold Bergman at 8:59 AM