10:00 am: We Are America, an affiliate of The National Mobilization for Just and Humane Immigration Reform, has shut-down east-bound Colfax. A gaggle of now familiar Unconventional, Recreate 68, Code Pink, and Tent State activists are engulfed in a sea of Mexican Grandmas, sassy chicana teenagers, clean cut Service Employees International communists, Guatemalan laborers, and large nuclear families. 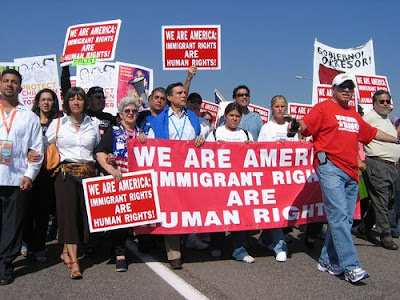 Finally! Some normal people supporting a cause that directly affects them!

The March Against Borders has clearly defined ones. A definite sense of ownership by the Hispanic community, and specifically by first generation immigrants, keeps everyone respectfully in line. Anarchists are admonished for covering their bandito faces. Hijos e hijas are shooed off the sidewalks with bull-horns ordering them back onto the street. 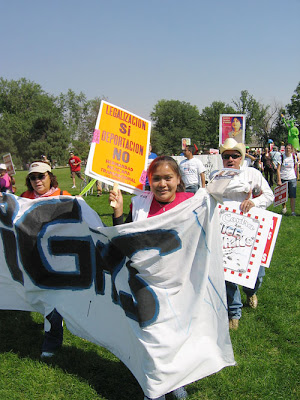 At Lincoln Park Abuelito y Abuelita sit in folding chairs watching Aztec dancers. Hispanics of all stripes scrupulously avoid the Food Not Bombs free burritos. A lone Hmong Immigrant with a placard respectfully reminds everyone that some people of the world have no homeland and must choose between fighting in the jungle or surviving a transcontinental shipping-container journey in hope of western asylum. 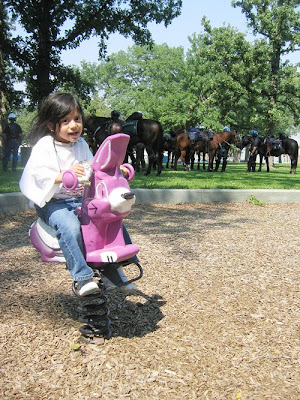 Life in the barrio.

12:00 noon: At a dismantled Tent State a lone Anarchist is passed out on the grass. Placards are piled onto blue tarps for reuse at Denver’s next major political event... Or for perma-storage in a basement apartment laundry room.

1:00 pm: A pasty guy with hiked up white socks and a kid with Insane Clown Posse grease-paint-induced-acne point the way to the 911 truth commission encampment. The conspirists are sorting out the yin and yang of having a permit for Gates Crescent Park – directly across the freeway from Invesco Field where Obama will make his keynote address in seven hours.

Rob Weiland of We Are Change Colorado sits cross legged in the grass at the entrance to the parks open field trying to unravel the legalise of his Denver Parks permit. Four of his colleagues are out in the field erecting an awning with IMPEACH and IMPRISON on one side and Obama BAMBOOZLE on the other. 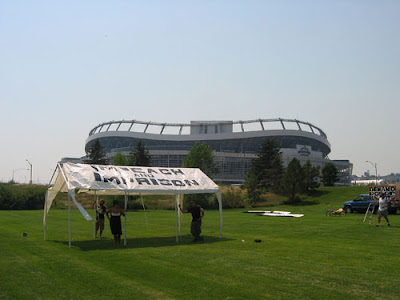 When logic and reason fail, try a publicity stunt!

The State Police stopped by in the morning to eject The 911 Truth Commission from the park. Rob was able to successfully fend them off with a cooperative attitude, an official parks permit, and the repeated mention of civil liberties and ACLU lawsuits.

The park is theirs for now – pending review by The Secret Service. Their officially permitted parking lot, however, is adjacent to the Stadium and consequently barricaded. Rob’s car is stuck inside. Vehicles with more 911 conspiracy themed helicopter photo-op props are barred entrance. Sympathizer and Independent US Senate candidate for Colorado Buddy Moore woke up this morning to a conspicuously absent campaign RV – towed with no notice by THE MAN.

As Rob reads the fine print out loud, “Denver Parks and Rec. and Denver Police reserve the right to limit, change and or revoke the venue of the users permit...” two bike cops cruise by and ask when the volleyball net is going up.

Denying these people a parking lot is akin to, pardon the tasteless metaphor, flying a 747 into the side of their conspiracy. Denver Parks is practically begging for Alex Jones to show up with a 50,000 megawatt bull-horn to drown-out Obama with a logic-leaping screed about the Bilderburg Group cabal secretly controlling the world through the incorporation of NAFTA. 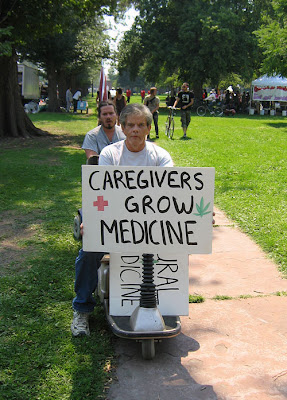 Not the best argument for the effectiveness of Medical Marijuana

Only fifty or so hardcores are left; girls with beards, black button-up wearing Anarchist prison ‘zine distro publishers, a lone space case on the bongos, stuffed animal back-pack sporting drama-club ravers, a honkey-G tween with a placard that reads, “The World Needs a Bong Rip”, an earnest east coast sociologist working up data for the doctorate thesis, and this last agent of the FREE PRESS. 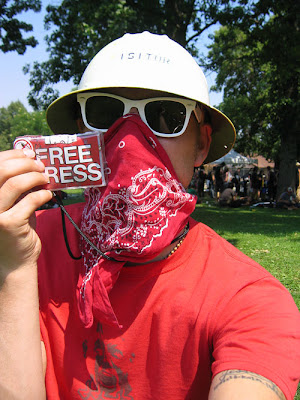 Your Presstester : You'll Never See My Face in Denver

Though SPAGZ is undoubtedly planning his final entrance, and Jill is assuredly mussing her hair over and over again and trying on different nouveau-boho outfits, there is a conspicuous absence of The Barnacle Protestor.

He could be crouched behind a dumpster along the parade route prepping for one last whirligig buzz-by. Or he may have decided not to quit his day job. Or, perhaps his journey through the belly of the wail at last nights march has led him to reconsider his Barnacle tactics. OR... maybe he’s clinging to the chasey of the Backbone’ Campaigns bus Cape-Fear style as it rolls across South Dakota on its way to the RNC with a PUPPETS MAKE PUPPETS placard clenched between his teeth.

As for “Pete Bergman” the “anonymous artist”, he has yet to show his face around Denver. Many of the players talk of meeting him. Evan Herzoff accepted a personally delivered custom letter-pressed formal apology letter for the WE BEAT YOU THEN flyer. Clayton Dewey of Unconventional Denver, refused a similar communique on the non-chalant grounds of, “I don’t really care about that.” JoJo of Tent State received a verbal apology, and was told of a formal letter for her Tent State co-chair Adam Jung. There is even rumor of a letter for Glenn Spagnuolo.

Though there is this evidence of contrition on the part of the anonymous artist there’s a stronger likelihood that he IS an agent provocateur, melting through crowds, flashing fake press credentials, snapping point-and-shoot pictures of the front lines, and gathering evidence on all the players.

This report was brought to you by

a joint venture of Lumpen

and The Institute of Sociometry.

For the prequel to this report, taking us back to May 4th 1886, following through the months leading up to the consecration of The Barnacle Protestor on July 10th of 2008, an exclusive simultaneous interview with the anonymous artist “Pete Bergman” and The Barnacle Protestor proving with finality that they’re not the same person, and an explanation of how this entire whirl-of-lies was an Ontological Anarchist gift for an uninvolved stranger, see Lumpen issue #110 – hitting the streets in September.

The Players – in order of appearance:

Come Up to Denver

Families United For Our Troops and Their Mission

Rage Against The Machine

We Are America (Pro Immigration)

Interesting menagerie, looks hot and boring for the police, until they had a chance to buy riot-police T-shirts. It's a great advertisement for peaceful protesting by thousands of normals and loonies, when the cops are peaceful too.

Your = belongs to you

The media is corrupt!

"Not the best argument for the effectiveness of Medical Marijuana"

Are you actually stupid enough to believe medical marijuana makes people in wheelchairs rise and walk? Or was that your idea of a joke?