By official Lumpen DNC Presstester
IS agent m[i]le[s]
(IS) May, 1968 - August, 2008
Those who try to recreate history are doomed to bumble it.
(See Additional Photos here)
On the night of May 10th, 1968 striking teachers, students, and a cadre of young trade unionists took to the streets of Paris’s Latin Quarter under the battle cry “End the Police State”. After swelling their ranks to over 50,000 barricades went up throughout the left bank to prepare for pitched battles with truncheon wielding police in what has become codified in the annals of radical activism as “The Night of the Barricades”. Amidst clouds of chlorine gas, the riot swelled over the next three weeks to include close to half-a-million. A general strike of nine-million workers in support of the students brought the de Gaulle regime to its knees.
A principal force behind this years DNC protests is “Recreate 68”. The name, according to the groups de-facto leader Glenn Spagnuolo a locally notorious professional protestor, refers to the spirit of mass political participation of the late 1960’s. Despite, or perhaps because of, such effective branding, Recreate 68 has been forced to defend a barrage of media spin painting the group as violent reactionaries intent on goading the administration of Denver’s quirky leftist Mayor John Hickenlooper into a rehash of Daily’s 1968 Chicago DNC gestapo Tactics.
Refusing to change the name of his coalition in the face of negative spin, or to specifically disavow violence as a (defence) tactic, Spagnuolo and Recreate 68 have weathered through a disassociation and some acrimony with other major permitted protest groups such as Tent State, a nationwide organization of college-student activists attempting to erect a tent city on the Platte, and Code-Pink a crack squadron of pink-costumed anti-war ladies in the 35 to 55 social demographic.
One of the only groups who continued to attend Recreate 68 working meetings leading up to the DNC was Unconventional Denver, a disruption focused squad of Anarchists who, in subscribing to an autonomous action philosophy, don’t quibble the details.
In a bizarre twist, Spagnuolo has even acquired his own personal protestor, a lone man adorned with a sign that reads “Beware Sheeple SPAGZ LIES.” Identifying himself to the Media as “John Q. Public” – but better described by local Westword scribe Jared Jacang-Mayer as “The Barnacle Protestor” his mission is to, “latch onto any other demonstration or event, get press and make everyone uncomfortable.”
(See the characakture) 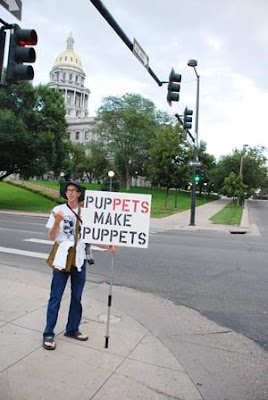 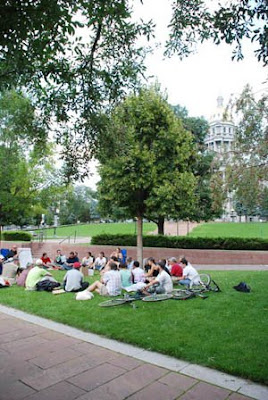 Recreate 68 pre-DNC working meeting
Spagnuolo, in addition to Denver Copwatch spokesman Evan Herzoff, Unconventional Denver spokesman Clayton Dewey, and a host of other local activists, we’re also the victims of a divisive and quasi-threatening prank by a local “anonymous artist” and “utopian anarchist” who may-or-may-not-be-or-be-related-to the Barnacle Protestor. In early June they received a flyer reading “WE BEAT YOU THEN! WE’LL BEAT YOU AGAIN!”, which appeared to be from a rouge Denver Cop threatening to recreate the 1968 spirit of mass police mayhem and wanton head-cracking. An hour before a press conference called to demand an Internal Affairs investigation into rogue cops, the “artist” outed the entire thing as a hoax through the local media.
(See the Flyer and read the article)
It was in this climate of (dis)organization, negative media hype, and protestor-on-protestor-protesting that the Denver activist community steeled itself for...

-----
(IS) Sunday August 24th, 2008
Day of the Protest Permits:
9:00 am: 1968 this is not. Denver radicals aren’t afraid of the sun and people are not sleeping in.
Over at Tent State crusty eyed college kids are lined up for the Rage Against the Machine free concert ticket lottery like cattle queuing up at the dorm cafeteria trough.
10:00 am: Recreate 68 exercises its first officially permitted radical action by entertaining a crowd of seventy or so on the steps of the State Capitol. A slate of hip-hop acts and radical speakers froth everyone up for the 11:00 am march to the “Freedom Cage” – the DNC’s fenced in free speech zone. The crowd is energetic but slight and comprised of the usual suspects; black-hoodied anarchists, Critical Mass bike punks, Green Party yuppies, earnest teenage hippies, and The Barnacle Protestor holding a sign that reads R68 SPREADS FEAR with an amazing whirligig device which animates four inch high wooden cutouts of two 60’s era white beat cops kicking and night-sticking a crouching brown man every time the wind blows.
11:15 am: Everyone rolls out for the Pepsi-Center leaving behind a small crowd of international and out-of-town media asking each other where the parade route is, (from here to the Pepsi-Center... Just follow the parade!?) and The Barnacle Protestor watching his back while smoking a cigarette. This presstester walks over to try to get a statement and untagle the mess of conflicting reports tying him to the WE BEAT YOU prank.
m[i]le[s]: Pretty amazing device. Did you make that?
BP: No an artist named John Fitchen made it. Its one of fifty – one for every state.
m[i]le[s]: Did you make that flyer? (Pointing to the WE BEAT YOU THEN flyer screen printed onto his T-shirt.)
BP: No I picked it up at the Gypsy House Cafe. (Where Recreate 68 was holding their working meetings.)
At this point The Barnacle Protestor goes into a first amendment diatribe that seems to be the pre-cursor to a rambling stream-of-conciousness speech.
Fifteen feet behind The Barnacle Protestor, languishing in the grass under the protective shade of three 250lb. plus body guards, Ward Churchill – the infamous University of Colorado Professor and American Indian Movement activist who referred to the World Trade Center victims as, “Little Eichmans” – observes and listens to The Barnacle Protestors First Amendment rant.
m[i]le[s]: Mr. Churchill can I get a picture?
Ward: I guess if you were a cop you wouldn’t ask.
R-68 Security (stepping in): You’re with him!!! (Pointing to The Barnacle Protestor). NO PICTURES!”
This agent gives The Barnacle Protestor my number, and a request to keep me updated on his schedule and heads off to...
12:00 Noon: Families United for Our Troops and Their Mission is dug in on the corner of Colfax and Broadway in between the swirl of Official DNC booths at Civic center park and R68, Ward Churchill, and the slate of off-the-charts-left squawkers on the Capitol steps.
An earnest Cope-Pink demographic lady is giving a Code Red-White-and-Blue eulogy of her son Mark – a Navy Seal killed in Ramadi. Mark stood up in the line of fire three times to cover his comrades in a roof-top fire fight before laying down his life. She turns to address the Capitol and the now dissipated throng of Recreate 68, “My son died for your freedoms... Mark was not an officer, but he was a leader!” 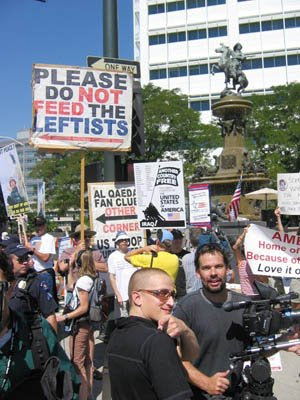 Families United for Our Troops and Their Mission and Media covering Media.

Moist eyes all around, signs reading “Don’t Feed The Leftists” and “General David Petraus, American Hero” are pumped in the air to rousing patriotism.
1:30 pm: Over at Tent State disgruntled College kids who drove in from all over Colorado are told that the Rage Against The Machine Ticket Lottery has been suspended until 4:00 pm to encourage participation in..:
2:00 pm: Tent State’s Funk The War costume dance party and march leaves Union Station headed East up the 16th Street Pedestrian Mall toward the Capitol and Civic Center Park with a crowd of approximately two hundred. Plain-cloths protestors are interspersed with ten foot carnival puppets, Tent State college kids pushing beat blasting PA carts, banner wielding human-rights activists, a small squad of black-n-orange flag Unconventional Denver anarchists, Code Pink ladies on immaculately decorated bikes, nostalgic hippies, convention tourists, Recreate 68ers on loan from the Capitol rally, and media media media media, are all accompanied by fifty, motorcycle, bike, and traffic cops, halting cars and politely trying to keep everyone on the sidewalk. 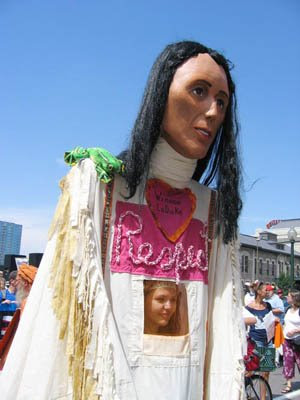 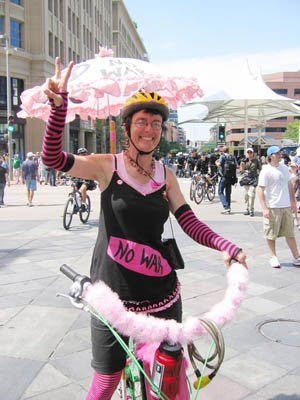 Stopping for occasion red-light dance parties, the procession marches ten blocks up to California Street where the crowd begins to stagnate and dissipate. The Recreate 68ers continue on to the Capitol, the black-n-orange Anarchists turn around and began marching against the current, the plain-cloths protestors and convention tourists relegate to the sidelines for souvenir snapshots, and the Tent Staters begin heading back to their river-side lair. 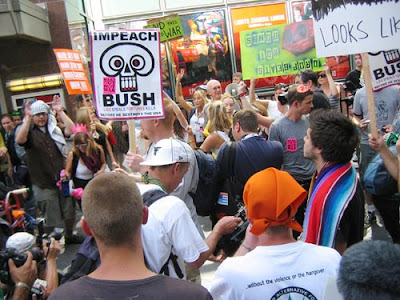 3:00 pm: Those remaining confusingly fall into line and begin to march back to Union Station. At Stout Street marchers, cops, and media media media, are flanked by a side-street-surprise-attack of close to two hundred fifty previously unseen Unconventional Anarchists led by the initial black-n-orange color guard and an advance cavalry of track-bike punks.
Spread out curb to curb in the face of brakes-jamming traffic, and radio barking cops, they march up to and take over the pedestrian mall, absorb Funk The War, and turn east toward the Capitol yelling call and response.
WHO’S STREETS?
OUR STREETS!
WHO’S STREETS
OUR STREETS! 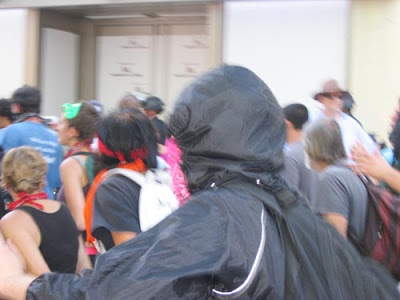 Our Streets, The Anarchists take over.

Two blocks further east the riot cops began to manifest from nowhere. Thirty line the mall with night sticks, then fifty at the intersection with rubber bullet and pepper spray guns, then fifty bike cops coming up from the rear, then thirty on horseback, then multiple SUV’s with a dozen hanging off the side of each keystone cops style, then middle age men in khaki’s and blazers with Obama lapel pins RUNNING at a dead sprint while barking into discreetly sized handhelds.
Turning the corner at 16th street onto Broadway, the Anarchists make an attempt to shut down the city’s main intersection, Colfax and Broadway – right down the hill from the Capitol. Now in Battalion Force and operating-on-a-dime, the cops push the Anarchists onto the sidewalk of Lincoln Park, the one block greenery separating the official DNC fest at Civic Center Park and the Recreate 68 rally at the Capitol, effectively separating the Anarchists with a riot squad buffer from the DNC folks shilling Obama t-shirts. The cops make an example of a twelve-year-old Hispanic Teenager who tries to break the barricade by cuffing and stuffing him – much to the consternation of the crowd and the delight of the media media media.
Clayton Dewey, Unconventional Denver’s spokesman, walks to the front line, throws up his arms and yells,
“HEY DEMOCRATS!! ARE YOU GOING TO LET THEM ARREST THIS KID? IS THAT WHAT YOUR PARTY IS ALL ABOUT?”
After half-an-hour the Anarchists melt-away to battle another day leaving behind the now incensed daily denizens of the park. Lampin’ Gangsta’s, down-and-outs waiting for the #15 bus, and inebriated hobos. One honkey-G starts yelling, “Man this is bullshit! The DNC is bullshit. Yo! Fuck tha’ Police! Democrats are Bullshit.”
Eventually the crowd of stragglers stroll off to their respective haunts revealing The Barnacle Protestor. He stands alone, toes hanging over the curb, faced by a remaining battalion of fifty or so riot cops, casually spinning the windmill on the whirlygig and animating the little wooden beat-down for the media media media as they cue up behind him to take turns getting The Shot. 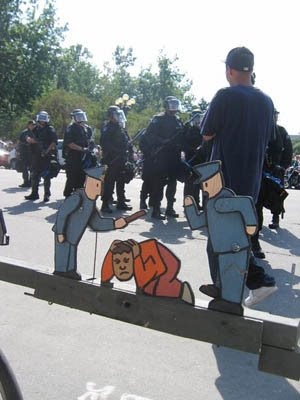 The whirlygig (deployed by The Barnacle Protester, made by John Fitchen)
Posted by Public Media Institute at 12:13 PM